Economic woes and the fight against injustice

It was an emotional and touching sermon at mass last Sunday as the priest touched on the prevailing deplorable political situation in the country. The ongoing kangkung controversy might have a started as a joke but is something not to be laughed at and ridiculed as serious issues lie masked behind it.
The main among them is the escalating cost of living due to rising price of almost everything. The year 2014 is going to be very difficult one for the ordinary man on the street, especially those earning less than RM2,000 a month. How is he going to feed his family? How is going to pay for shelter over his head? How is going to pay for the school expenses for his children? How is going to find money to pay for the medical emergencies in the family? These are some of the doubts that are causing great anxiety and fear among many Malaysians who are struggling to make ends meet. To make matters worse we are told that that some of those receiving monthly aid from the Welfare department are denied such aid for no genuine reason. How are they going to survive?
With every passing day the present government seems to be increasingly proving to be totally incapable of managing the national wealth and economy of the country. It is not capable of putting an end to the massive corruption that is draining away the people’s hard earned money, resulting in the need to increase the price of almost every commodity, including the basic fundamental needs of the rakyat. Where are the people going to find the money to support their basic needs when the bulk of the wealth is being siphoned away in the name development?
As expected the kangkung issue has now been successfully manipulated to become a racial one by the politicians at the expense of the well being of the people. Instead of finding ways to overcome the economic problems facing the nation we are now taken into another confrontation of the races in the country, when the Allah issue is yet to be solved. The government and its proxies are bent on just uniting the Malays and Muslims to gian the support suppress the minorities whom they see as anti-government and a threat to their continued hold onto power. They are prepared to resort to any means, including the misuse of the various institutions, to do that which is indeed frightening. Where are all these leading us and our nation?
A feeing of hopeless has set in and the people are angry and want to act but not sure how to do so. What we fear most is that the people will being pushed against the wall may resort to violence that would be detrimental to all.
As Christians there no doubts that we must stand against injustice. We cannot be passive and ignore all the injustice around us. The question is what can we do when all the institutions are lopsided and refuse to see our plight which is legal and justified. Our fight against injustice we must go on but must be based on the teachings of Jesus – humility, love and forgiveness. There is no place for revenge, anger and pride in our struggles. Truth must be defended however bitter it may even if it is against us as it will finally prevail.
Amidst these economic and political uncertainties, we are told in a neighboring parish, there are plans for raising funds to build a multi-million ringgit Pastoral Centre. It is ironical that instead of finding ways to alleviate the financial burden of the people, the church in embarking on projects to cause more difficulties for them. It is an indication of a total lack of sensitivity for the plight of the poor.
We have just to look around and the plight of suffering people will be glaring at us. Instead of spending money on buildings, this is the time to start a fund to help the poor out of their financial crisis. For a start we begin by helping those in our parish who we know well.
We have the means, the resources and the talent to set up such a skillful team at parish and diocese levels. What we need is a will and commitment in our hearts which is sadly lacking. We are repeatedly told to donate generously to build churches and pastoral centers for God but we forget that God does not need buildings but our hearts to dwell. In the building of God’s Kingdom, it is God who takes care of our needs not we who take care of His.

Pope Francis and his Church for the poor

Humility needed to overcome inter-faith impasse
The most important issue in 2013 that affected us in the Church and Christians and continuing to haunt us is the on-going Allah controversy. 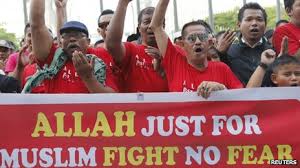 While the whole world, including the International Muslim community, accepts the use of the word “Allah” by non-Muslims, our government and our judiciary, refuse to grant that freedom for us in Malaysia. In fact a simple issue has been turned into a major political one that has adversely affected the Muslim-Christian relationship in the country and threatens the peace and harmony between the majority Muslims and minority Christians in the country.
It is extremely sad that our judiciary had succumbed to the pressures of their political masters to totally disregard all the historical and legal facts that favour us in our fight to safeguard our religious and constitutional rights that are enshrined in the Federal Constitution and clear for everyone to see.
The Christians must be commended for their patience and willingness to take blows of injustice peacefully without hatred for their fellow Muslim brothers. This action of Christians is indeed Christ-like who took all the blows before his death with love and compassion, even forgiving all those who struck him mercilessly to death.
The Allah issue is just the tip of the iceberg, as the bigger issue at stake is not religious but political. The fear of proselytization of Malay Muslims by Christian Bumiputras from Sabah and Sarawak whose population in Peninsula is increasing steadily is causing fear to Umno which has a strong hold on the Malay Muslims in the country. Any dilution of this Malay-Muslim population will be a severe blow to its strength in the federal government. Therefore it has to go all out to stop this influence of Christians on the Malay Muslims. Umno is least bothered about the Chinese and Indian Christians as they know the Malays will not be significantly affected by them.

This issue should have been ideally settled by dialogue but unfortunately now rests in the courts whose decision even if unjust must be adhered as otherwise  it would be seen as contempt of court, another serious offence. We must understand the dispute is with Umno and the institutions under its control not the Malays in general who are kept ignorant of the real facts of the case. Unfortunately Umno with is vast power has turned the issue as a fight between Christians and Muslims in its favour. This has put the minority Christians in a dilemma on what to net to get out of the impasse amicably.Will an appeal to the Federal Court make any difference?Nobody in the right mind will say yes.

The Muslim-Christian relation has come to a dangerous standoff that must be diffused with care.One party must give in and the question is who would be that one who can swallow their pride and give in for the sake of greater peace and harmony in the country.It is not about winning or losing and definitely not about who is powerful.It is about humility,peace and harmony.Obviously present day Umno does not have the humility to do that as it has more to lose. For the Christians on the other hand humility is one of the most important virtues taught and demonstrated by none other than Jesus Christ himself. To them humility is not a sign of weakness but strength.

Will the year 2014 be any different for inter-religious harmony?It all depends on the moderate Muslims in the country who make up a mere 10% of the Muslim population.Can the Christians appeal to this minority who are sympathetic to them to champion their cause for religious freedom? Will the moderate Muslim Malays rise up and try to influence their brother Muslims to get rid of the unfounded fear for their fellow Christian Malaysians?
What more can we do to regain our rights? As true followers of Christ we cannot fight them by confrontation, we cannot win them by force but can only win them over with love. Are we prepared to do that? The answer depends very much on us and the Allah issue is not the only thing that matters as there are much more important issues at stake for us Christians and other non-Muslims in the country.It will foolish to allow a smaller issue  to stand in way of more important matters at hand.