As we prepare to celebrate Christmas this year two important news caught my attention.

The presence of God today is also called Rohingya 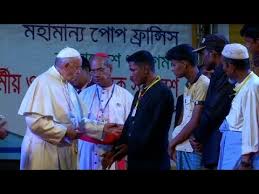 The first was the touching meeting of Pope Francis with 16 Rogingya refugees in Bangladesh where he asked their forgiveness for the “world’s indifference” to their plight.  He further said something that touched me, “The presence of God today is also called Rohingya.” By these words he was saying he saw God in these pitiful poor and helpless Rohingya refugees whom nobody wants.

These are very powerful and extremely meaningful words from a Pope in world torn apart by war and turmoil caused by ethnic and religious hatred. At a time when the Muslims are ‘hated’ for the various terrorist attacks, we have the pope who calls the Rohingya Muslims Godly. As expected he has been severely criticised for his actions not just outside but within the church itself. 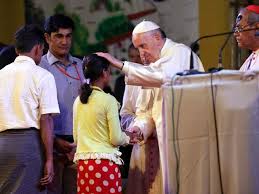 By his actions in support of the Rohingya refugees the Pope has risen above race, religion and politics to speak for the plight of the poor refugees who were left homeless, hungry and without any humane treatment from the world. In the midst of all the this chaos of human misery comes a man doing what Christ would, being concerned and compassionate to the poor and suffering refugees. He does not see them as Muslim or terrorists but just suffering fellow humans who need help. He was simply a fellow human with feelings for the suffering of other fellow humans.
The Pope’s message is indeed something we should reflect on this Christmas. He is asking us to see God in the faces of the poor and suffering in our midst, doesn’t matter who they are. The Pope is acting as an agent of God bringing goodwill and peace to the poor and despised, so must we. Today we have more politicians than agents of God. For a better world we need more agents of God, like Pope Francis and less politicians, the latter we have more than enough. 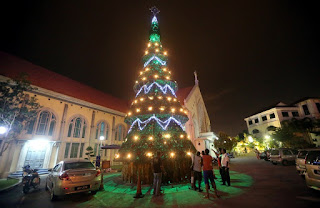 The second news is about the giant 56 feet tall Christmas tree costing about RM25,000 that was put up in the premises of the Church of Our Lady of Lourdes(OLOL) in Ipoh.
The creators of the tree hope that the tree would be a source of joy during the coming Christmas season. Is the Joy of Christmas all about Christmas trees? If so I am sad we have got it all wrong. It is not wrong to light up Christmas trees but do we need to spend such a big sum?


While the money for the tree may have been collected from the people but RM25, 000 we must admit is a very large sum that could have been used to bring more meaningful joy to the people. This is particularly so at a time of economic difficulties in the country.
at December 13, 2017 No comments: Links to this post